There’s a rough number of 20 000 lions left in the world according to a survey conducted in 2020.

The mighty lion, one of the most well-known and revered animals on the planet, is viewed as a symbol of both power and royalty in many different cultures and nations all over the world. They are frequently aptly referred to as the “king of beasts” due to their extraordinary strength, hunting ability, and regal nature, as well as the males’ majestic manes.

While lion prides once roamed Europe, Asia, and Africa, the majority of the animals are now only found south of the Sahara. Gujarat, an Indian state, is home to one isolated population.

Unfortunately, only 20,000 of these amazing animals are thought to be present in the wild at this time. This is primarily due to the fact that people have encroached on the grasslands, savannas, and woodlands where lions hunt their prey, such as antelopes and zebras.

Tanzania is without a doubt the best place to see these majestic animals up close and in the wild because it is home to the majority of the world’s remaining lions. Thousands of visitors arrive in the nation of East Africa each year to go on safari amid its breathtaking scenery. Around 3,000 lions are thought to live in the Serengeti alone.

Teams of lions cooperate and kill gazelles, zebras, and wildebeest on the vast plains so that the pride can feast on them. While dawn and dusk are their preferred times for hunting and when they are most active
Large populations of the ferocious predators are also found in the Ngorongoro Conservation Area and Ruaha National Park, in addition to the Serengeti National Park.

Undoubtedly, Botswana’s main attraction is its wildlife, with sizable portions of the nation’s wilderness and natural landscape being protected as national parks. The Okavango Delta, one of the most extraordinary and unforgettable safari destinations on Earth, is the best place to see lions, despite the fact that they are frequently spotted throughout the country.

However, in the Delta, lions have learned to hunt through channels, floodplains, and even islands, whereas they normally stay away from the water. The fact that adult elephants, buffaloes, hippos, and gazelles are hunted and killed by Botswana’s big cats in addition to antelopes and gazelles is even more astounding.

Kenya, a long-time favourite safari destination, rivals Botswana and Tanzania in terms of amazing wildlife. The country’s numerous national parks are now thought to be home to more than 2,000 lions thanks to effective and creative conservation efforts and close collaboration with local communities.

However, the renowned Maasai Mara, which stretches on forever in the southwest of the nation, is the best place to see them. Visitors can see large prides on safaris in a number of national parks, including Meru and Tsavo West, in addition to the Big Five and countless lions, lionesses, and cubs that call the vast grasslands of the region home. 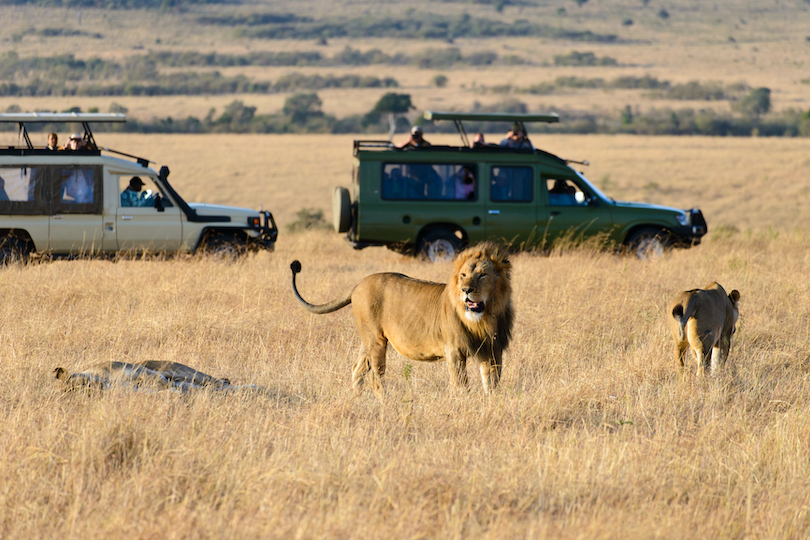 One of the most famous and popular places to see lions in the wild is in South Africa, which boasts an astounding array of excellent national parks and nature reserves. Once scattered throughout the country, lions now mostly reside within protected pockets with the only free-roaming felines to be found in the north and eastern parts of the nation.

While the Gondwana, Kwandwe and Shamwari game reserves all offer up some fabulous wildlife viewing, the star of the show is undoubtedly Kruger National Park, which is home to around 1,600 lions.

In addition to snapping photos of them resting in the shade or seeing prides of lions roaming about the savanna, you may also encounter the elusive and rare white lion from time to time.

Zambia also has one of the largest lion populations on the continent, despite the fact that it is frequently disregarded in favour of its neighbours Botswana and Tanzania. It is estimated that there are 1,200 of the powerful creatures living in the nation. The majority of visitors depart on unforgettable safaris after admiring the magnificent Victoria Falls.

The South Luangwa, Lower Zambezi, and Kafue national parks are the three best locations to see lions in the wild. While all three provide fantastic opportunities for wildlife viewing, the former is regarded as one of the top wildlife sanctuaries in the entire world. In addition to viewing lion prides during the day, tourists can arrange thrilling nighttime safaris and even safaris on foot.

While lions once prowled freely throughout the Zambezi Delta’s game-rich wetlands, the tragic fifteen-year civil war in Mozambique resulted in a sharp decline in their population. But now, with over 150 of the magnificent animals present in Gorongosa National Park alone, the lion population in the nation of southeast Africa is slowly making a comeback.

The expansive park, which is rarely visited by tourists, spans a large valley and is home to savannas and woodlands that are ideal for lion habitat. The rest of the time you can see lions prowling around and hunting for prey, even though they astonishingly spend about twenty hours per day lying down and sleeping.

Namibia is now thought to be home to up to 800 lions, boasting some of the most effective conservation strategies in all of sub-Saharan Africa. While the majority of desert lion prides roam around Etosha National Park, some live off the land along the Skeleton Coast’s scorched shores. When other food sources are limited, they will occasionally eat seabirds and even seals.

However, the majority of the lions in the nation reside and hunt in the isolated regions of northern Namibia; the biggest populations are found in the national parks of Khaudum and Etosha. Visitors have a good chance of spotting lions in the parks and reserves of the Caprivi Strip in addition to seeing them congregate around the Okondeka or Ombika waterholes.

Delightfully known as ‘Africa in Miniature’ due to its diverse peoples, cultures and ecosystems, the Central African country of Cameroon is also fittingly home to lots of lions. While many populations are under pressure from human activity, prides of the predators can still be found in the numerous national parks scattered throughout its northern realms.

While only a dozen or so are thought to remain in Waza National Park, many more are believed to live in both Benoue and Bouba Njida national parks, as well as Faro Reserve. In total, just under 300 lions are estimated to reside among Cameroon’s grasslands, woodlands, and transition zones. Their most common prey consists of antelopes and waterbucks, as well as the occasional buffalo.

As it is home to some of the largest prides of the critically endangered West African lion, Benin is one of the best places to see the ferocious hunter up close and in the wild. One of the last remaining strongholds of the big cat in the region is Pendjari National Park, which is located in the northwest of the country.

Although often overlooked by tourists, Pendjari is one of West Africa’s top wildlife destinations and has around a hundred lions residing within its confines. Besides seeing lions play, prowl, and hunt for prey amidst its vast savannas and woodlands, visitors can spy everything, from elephants and hippos to cheetahs and antelope.

India is actually home to the last remaining population of Asiatic lions, despite the fact that it is almost certainly not the first place that comes to mind when people think of lions in the wild. The majestic animals, which once roamed across much of the Middle East and Western Asia, are now sadly restricted to Gujarat’s Gir National Park.

The lion population has increased from just a dozen in the late 19th century to an estimated 600 today, making it a success story for conservation. Asiatic lions are a little bit smaller than their African relatives and also have a thicker coat and less mane. Gir National Park’s safaris are incredible experiences because you can see lions prowling through its sparse woodlands and dry terrain.

Countries visa-free entry is permitted for holders of US passports

The Extinct Animals We Have Lost in the Past 150 Years

Several species have been driven to extinction in the last few decades due, in major

Wildlife
6 min read
We use cookies on our website to give you the most relevant experience by remembering your preferences and repeat visits. By clicking “Accept All”, you consent to the use of ALL the cookies. However, you may visit "Cookie Settings" to provide a controlled consent.
Cookie SettingsAccept All
Manage consent

This website uses cookies to improve your experience while you navigate through the website. Out of these, the cookies that are categorized as necessary are stored on your browser as they are essential for the working of basic functionalities of the website. We also use third-party cookies that help us analyze and understand how you use this website. These cookies will be stored in your browser only with your consent. You also have the option to opt-out of these cookies. But opting out of some of these cookies may affect your browsing experience.
Necessary Always Enabled
Necessary cookies are absolutely essential for the website to function properly. These cookies ensure basic functionalities and security features of the website, anonymously.
Functional
Functional cookies help to perform certain functionalities like sharing the content of the website on social media platforms, collect feedbacks, and other third-party features.
Performance
Performance cookies are used to understand and analyze the key performance indexes of the website which helps in delivering a better user experience for the visitors.
Analytics
Analytical cookies are used to understand how visitors interact with the website. These cookies help provide information on metrics the number of visitors, bounce rate, traffic source, etc.
Advertisement
Advertisement cookies are used to provide visitors with relevant ads and marketing campaigns. These cookies track visitors across websites and collect information to provide customized ads.
Others
Other uncategorized cookies are those that are being analyzed and have not been classified into a category as yet.
SAVE & ACCEPT